I recently learned a whole lot more about Bacteria and how they adapt to survive against human antibiotics and other bacteria alike. I learned this from a book I recently finished titled "The Coming Plague:Newly Emerging Diseases in a World Out of Balance" by Laurie Garrett. Garret. She attended graduate school in the Department of Bacteriology and Immunology at UC Berkeley. She worked for KPFA and then NPR as a science corespondent. As a medical and science writer for Newsday, in New York City, Laurie Garrett became the only writer ever to have been awarded all three of the Big "Ps" of journalism: The Peabody, The Polk (twice), and The Pulitzer.
Bacteria have several means at their disposal for adapting and changing. These include turning on and off DNA gene expressions, trading plasmids, DNA scavanging and mutations. Lets review DNA scavenging first because it's fascinating.
DNA scavenging sounds just like it means, the bacteria wait for something interesting to pass by it and it snatches it up. Like a voracious lion, it surrounds the new DNA and encapsulates it. But this is not a blind effort by the bacteria. The bacteria has checking mechanisms to examine if the DNA makes something useful . In this manner, bacteria can acquire the plans to make membrane pumps from the DNA segments or genes called mdr or pgp. These pumps can be used by everything from cancer cells to yeast. Cancer cells use them to expel chemotherapy drugs. Once the drug breaches the cell wall, the pumps activate and throw it out.
Plasmids are little extra bits of DNA that are encapsulated in their own cell. They can be turned on and off independently of the other DNA in the cell. Think of them like special abilities from the characters in 'Heroes'. Each plasmid gives the bacteria a different ability. One plasmid may give the bacteria a resistance to a particular strain of anti-bacterial. Plasmids can be transferred from one bacteria to the next by conjugation, one cell wall touches another. Staphylococcus acquired penicillin resistance by absorbing the beta-lactamase plasmid in the 1960s. Bacteria can transfer immunities by passing plasmids to their neighbors.
Turning on and off DNA expressions, 'genes', is like the bacteria's way of shuffling through it's library of information and picking the right tool for the task. An example of this was demonstrated by John Cairns in 1988 when he created a specific set of E. coli that had the genes to survive in an altered chemical environment but those genes were turned off. He then altered the environment so the bacteria could survive only if it turned those genes on. the bacteria would specifically turn those two genes on, and do it in far less time than it would have taken with random mutation.
Mutations in bacteria DNA while overall can be catastrophic, when it works correctly it can change things like the characteristics of the cell wall, making it harder for the immune system to recognize the invader. But mutations were not desired by the bacteria in all places along their DNA chain. In some places they have 'enhancers' which command the copying molecule, polymerase, to act with greater care, making accurate and multiple copies of a stretch of genes. Key characteristics that these thorough copy mechanisms protected was the information on how to invade range of cells. In other places copying was completely haphazard, especially in places that coded for the characteristics of the ever changing cell wall.
Sporulation can be activated by a set of genes in a cell and it causes the bacteria to become dormant. Instead of trying to find resources to consume and avoid the human immune system, they construct a fortress with reinforced cell walls and slow down their internal processes. The bacteria then can survive conditions that otherwise would kill them. After the danger is passed, they can reemerge.
How are bacteria able to accomplish feats like going through a library of DNA and picking out the right portion that will save them, I do not know. By 1993 most every common pathological bacteria we had been fighting successfully had developed resistances to one or more treatments. I think with all these tools at their disposal, and our minimal understanding of DNA manipulation, we are in for a long fight yet. 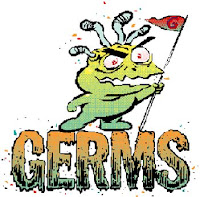 I just installed Fedora today, it's a free version of Linux that was my alternate to purchasing RedHat. Coming back to Linux after being out of it for a while was a challenge. I could not even get the wireless card to install. (Apparently this is a typical problem).

A few things that I did learn today:

How to Share and Internet connection with a Mac. Go to System Preferences, click on the Sharing icon, then click on the Internet Sharing Box. Select where you want to share internet from / to. I had internet through the WiFi and needed to share to a Laptop connected via Ethernet. I did not even have to change the CAT5 cable from a regular to a crossover. It was wonderful. A few seconds later, I opened up fedora and told it to connect to the network it found and BING! I'm in business.

Logging in as root in a terminal and other useful setup tools can be found at the Fedora FAQ page. I just had the largest sense of deja vu I've had in a while. I guess we were supposed to move to this new house afterall!

Wireless drivers for Linux products are few and far between. Apparently part of the reason they are not developed by the community is because card manufacturers will not release their source code to consumers. Therefore open source groups cannot create drives. In addition, card manufacturers are not creating their own drivers. This leaves a bit of a gap in the system which requires one to first install a windows emulator and then install the drivers for the card. The first part of this process is achieve by downloading and installing NDISwrapper. However installing it using the make command was not working so I had to get the developer tools for fedora first using the command: yum groupinstall "Development Tools" . This uses the internet to download updates and tools. Which I could not do until I installed the internet share (see above).
Posted by Eliot at 7:00 PM No comments: