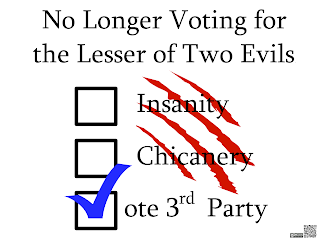 Door#3 by SkithUno is licensed under a Creative Commons Attribution-NonCommercial-ShareAlike 4.0 International License.
Posted by Eliot at 5:15 PM No comments:

The DAO and Optimizing 'Theft'

The likelihood of a soft or hard fork should be correlated to the amount of ETH that was 'unexpectedly transferred' due to edge case scenarios. We posit that larger the quantity of ETH 'transferred', the more willing the community will be to institute hard and soft forks.

Exceptions to the rule happen everywhere. How a society deals with those exceptions speak wonders about the people in it. The 'lost stone' on the island of Yap is an excellent example of an exception. The islanders used the stones as currency and one stone was unexpectedly transferred into the sea, an edge case of moving a large stone from one island to another. The islanders had two choices, they could insist that the stone be hauled up from the sea floor in order to be counted as currency, or they could make an exception to their rule and allow the stone to lie at the bottom of the sea and still count as currency. Their society was able to reach consensus on this issue, most likely because it took a great deal of effort to harvest the stones.

The DAO fiasco can also be considered to be and edge case. Originally, designed as an investment vehicle to stimulate growth in Ethereum, it is now a liability. The quantity of effort that was put at risk due to this edge case is very large, around 1/10th of all the ETH created is. Based on the lost stone example from above, we would expect that if something that took allot of effort to make was 'lost', the community overall would support some remedy to the situation. We believe this is even more likely in the scenario of the DAO where vested interests are far reaching and touch many community members including small time miners like myself.

Based on that knowledge, we put together an estimate of how likely people were to support a fork based on how much ETH was 'transferred'. Essentially we'd expect that for small losses, not enough people would care to support a fork because it probably didn't affect them and systematic risk was small. And with large losses, community support would increase significantly due to the increased likelihood that more people were affected and the perceived systematic risk increase which leads to questions like: Will PoS actually work when one 'entrepreneur' siphons off a huge amount of the currency? Furthermore, we'd always expect more people to support soft forks than hard forks.


We then polled the community, and from the few responses we received we found a similar trend:

What does this suggest for successful 'entrepreneurs' of the future? If you find an opening that allows you to 'transferred' a small amount of ETH, you'll probably get to keep it. However, if you find a big opening which causes allot of ETH to be 'transferred', you may end up with nothing. This is because the likelihood of community response to remedy problems increases as the % of ETH 'transferred' increases. Where exactly that transition region between community disinterest and community action appears to lies around the 7% region.

Things You Don't Want To Hear

NPR's title for this piece was delicately constructed to hide the real heart of the matter: Congress raided the TSA fund, then decided to fire the head of TSA for long wait lines.

If we can't have discussion on how the issues are framed to the public, what can we talk about?
Posted by Eliot at 2:56 PM No comments:

Annuities, a Questionable Investment During US$ Fade

A recent NPR article highlighted a reasonable strategy to hedge risk of outliving your savings. But it's dollar-based payout system will leave many seniors paying the bill if the dollar declines. The dollar is the undisputed world reserve currency, for now, with many smart people at the Federal Reserve managing it. However, new challengers have emerged to the dollar. These challengers are backed by advances in mathematics and cryptography. The challengers use computer algorithms to manage them, instead the 'little grey cells'. The challengers are fundamentally more efficient, adaptable, and less arbitrary than the dollar. The one saving grace, so far, is that the dollar has been more stable than the challengers.

Investors buying a 15 year deferred fixed annuity are betting that they will: (A) be alive and (B) dollars will hold their value until they die. That is a rather large bet in favor of the incumbent. If the dollar transition happens while they are alive, they are going to be impoverished.

What is really going to drive this transition? The IMF has detailed that these challengers "... will likely be more widely adopted in countries with less credible monetary policy." (source) Now how could that be the US dollar? Look at what happened in 2008. Too big to fail and implied federal loan guarantees will happen again. Look at how the Federal Reserve manages the currency. Two words in a long technical talk cause major ripples in the economy. Look at the way the Federal budget is managed.  History tells us there are three ways out of a debt hole you vote yourself into: Inflation, Haircut, or Monetary unit change. None of those ways works out well for people holding dollars or expecting to receive dollars.

Maybe you think you will pass away before the transition. For me, I am in my 30's. I am going to have to live through it. I am betting on the challenger.
Posted by Eliot at 5:25 PM No comments:


Came across problems getting my 1x to 16x PCIe risers to work on my GIGABYTE GA-F2A88X-UP4 motherboard. Several forum posts from litecoin forums have descriptions on how to solve these types of issues but they aren't all in the same place. Here's a conglomeration of all the potential issues you could be facing if these risers don't work immediately when you plus them in.

BIOS  Settings - The fickle mistress, there are lots of settings in here that can trip you up. Some key things that need to be set here, make sure your PCIe cards are set to run as Gen 2.0 not auto. Gen 2.0 is the most likely config that your extenders will work with. On some motherboards there are a limited number of systems that can be run simultaneously and some periferals will take priority over your PCIe 1x slots. To fix this, you need to disable these extra periferals. As a last resort, disable the USB 3.0 driver and the SATA driver. I managed to get my system working with both of these on however.

Unpowered Riser - Whatever type of riser you buy, make sure it has a a 4 prong power port. The PCIe bus can demand up to 75w of power and an unpowered riser will cause you trouble. Make sure that a ground wire is also included. It's good to get one that has a capacitor between the ground and the power to smooth out any power flucuations.


Shorting Pins - Sometimes people recommend shorting some pins on the PCIe board. This is not typically required anymore because the pin shorts have been built into the card. This is the case with the USB3 riser in the top picture. If you look at the trace of the metal, you can follow it and it clearly shows that the two required pins have been shorted.


Power Supply - Video cards draw a lot of power and if you don't have a large enough power supply, they may not power up properly. The typical R9 280 & R9 380 draw around ~200W, your R9 290 and R9 390 will probably draw around ~300W. Make sure you're power supply can handle the demand of all your cards turned on or you may undervolt stuff and cause it to malfunction. If you want to be precise in your power calculations, pickup a Kill a Watt EZ meter and sample your power usage over an hour. Make sure to add +20% margin for spike load. So if your meter says you are using 100W on average, make sure your power supply is rated for 120W.


Default Graphics Output - /u/arthropal pointed out that "motherboards will usually initialize whatever is in the top slot as the active console card, so if they have an extender on a top slot that's 1x, and they are trying to see output on the card in the top full sized slot, which is below that 1x slot, they will get black screen and seemingly no boot." To overcome this issue, make sure to fix the default graphics card selected in your BIOS settings.

OS Issues - There are some OS specific limitations to getting multiple GPUs to work but usually it's only after you've plugged in 6 or more GPUs. If you only plug in your powered riser and remove all other other cards and it doesn't work, it's probably not an OS issue.