I was reminded today how little we know about DNA and how much that understanding will change our future. In the 1800s man embraced the world of steam power which freed him from backbreaking labor. This was the daw of the age of powered machinery. With the advent of the resistors and eventually computers starting around the 1940s, man was freed from complex calculations that would have taken lifetimes. With the birth of the internet in the late 1960s, man was now free to roam the world, gathering information from many places and not being forced to listen to just one source. I propose the understanding of DNA, how the code actually works, will effect every aspect of our lives.

What we know about DNA is that it is a code made up out of alternating base pair sequences. Interestingly enough, instead of using just two sequences like some computer code (0 & 1), DNA uses four sequences ACGT (adenine,cytosine, guanine, thymine). There are several other differences between the two codes. Humans can interpret what computer code does. If there is a like 00001110101010 in a particular program we can say that unless something catastrophic happens, the computer will show a blue dot on the screen (or some such thing). With DNA we have only a basic understanding of the code. We can distinguish between different "genes" which give a rough estimation on the characteristics of a creature.

What we don't know about DNA is how each piece really fits together to make a whole creature. Humans cannot yet say, "Well if I switch this bond here will I get a whale or just primordial soup." Whereas with computers we can say definitively, "Blue screens will result if you change that bit because that bit allows one processor to correctly talk to another one which allows the system to function."

Understanding how each DNA piece fits together to make the whole creature has been slow due to intense computation requirements and ethical questions. DNA is not a linear problem like the "0"s and "1"s of a computer all lined up nicely in an array. DNA is a three dimensional problem where the folding of the molecule in three space changes the essence of the code. Within a cell, a line of DNA strung out and flat and the same DNA wrapped do not necessarily produce the same results when the cell uses them. (I read about how DNA in bacteria cells forms kinks which cause transcription of that piece to alter in the book "The Coming Plague.") The ethics behind this type of manipulation must be addressed. The United States holds human life to be of paramount importance. (For alternate perspectives on the value of life read "A Russian Diary" by Anna Politkovskaya.) If we are creating life in the laboratory by writing DNA code, where is the line where we say STOP! If we figure out how to duplicate a human brain, all on its own with no body attached, have we just created a living being? Can we stop feeding it? What should we do when it asks who am I and why am I here? These are big questions and ideally are questions we can address before the experimentation begins.

Many good things can come from understanding the DNA code:. Cows that can consume corn that does not kill them, (I recently watched King Corn.) New organs to replace worn out ones. New hands and legs for our stalwart soldiers, who are fighting every day to keep us safe. We could recreate the long lost mammoth. We could build animals that shared our abundant resources and added beauty into our lives. There are so many good possibilities that I believe we cannot forego this line of study.

Many bad things may arise purposely or inadvertently from understanding the DNA code: Vicious animals that kill for sport. Human augmentation that allows people to excrete poisons through their breath. Custom viruses tailor made to hurt the weakest and take advantage of those that cannot protect themselves. Because of these bad possibilities, some would argue certainties, we must be cautious and guarded studying in this field. We cannot act hastily and we must find ways to guard ourselves against the problems that may arise. 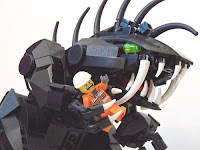 Understanding the DNA code is game changing knowledge. Knowledge itself is gray, neither good nor evil just like a weapon can be used for good or ill. It is the wielder that controls the outcome. So far America has been hesitant in it's pursuit of this knowledge. The bush administration and stem cell research being an example. But this hesitance must not last. If the United States understands this technology, we can protect those that do not. We can ensure that billions of people are not wiped out by engineered plagues. But if we do not harness this knowledge, lesser men with lesser scruples will be in the position to decide not just our fate, but the fate of the world.

If Russia had developed the nuke first, do you honestly think they would have stopped at East Berlin? I am glad that I will never know the answer. And that is why I love America, we stopped.