Designing spacecraft to survive low earth orbit is a challenge. Atomic oxygen is attempting to dissolve the leading surface of the craft, sunlight is pumping heat into your satellite and the gravity gradient and magnetic fields are playing with your attitude control systems. Most exciting, however, is the fact that the neutral atmosphere which can reach up to 1200km altitude, it in a slow dance with your craft. The atmosphere that exists up at 300km altitude is not as thick as down here at sealevel, but your satellite is trying to pass through it at 7km/second. At those speeds, there are enough particles to seriously effect your satellite, slow it down, and drag it back down to earth. Not to mention during solar max, the number of particles increases by a factor of three or more! That's like, wooooah!

So what can we do about this? Slap a thruster to your satellite and have it boost you back up to the speed and altitude you want. "But how much energy will this really take?" you might wonder. I'll give you an example:

A satellite with 1m^2 of leading surface area traveling at 300km circular orbit around earth with an engine efficiency of 150 seconds would require something on the order of 34 kg per year to stay in orbit. "That's fantastic" you're thinking. "Only an extra 34kg and I'm good to go!" Slow down there cowboy, there's a bit more to it than that see, if you go 50km lower, you need 3x that amount of fuel (103kg), and if you go 50km higher, you need only x1/3 of that fuel (11kg). Not to mention, if you satellite is traveling around during a solar maximum (lots of solar radiation and particles) you'll need 3x the amount of fuel for all those orbits!

So now you're thinking, "OK so I orbit the earth at 250km which means i need 34x3kg fuel and then during a solar max I need 34x3x3 kg! That's crazy! I liked just having to use 34kg of fuel." Well life ain't that easy. I've included a graph which can help illuminate things. 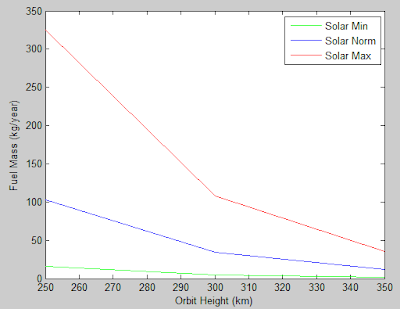 This is showing you graphically what we just talked about. The baseline case is shown in blue. When there is more (or less) solar activity, it changes the amount of fuel required to stay in orbit. This is because increased solar activity heats up the atmosphere (a gas) which then expands. As it expands, it pushes the top layers further up. This means that at 300km the density of the neutral environment (think air) increases as there is more solar activity. Conversely, the density of the neutral environment decreases when there is less solar activity. This means that if you're lucky and you are flying during a solar min period, you don't need to store as much fuel on your satellite.
Posted by Eliot at 1:23 PM