I've heard lots of you asking what does profitability look like for mining Ether and the first thing that comes to my mind is that it depends! Really it depends on the price of Ether, as well as the ratio of your hashing power to the total hashing power of the network. Not to mention, e- costs.

Now we could go into a whole bunch of mathyness but lets just skip to the pretty pictures and explain them later: 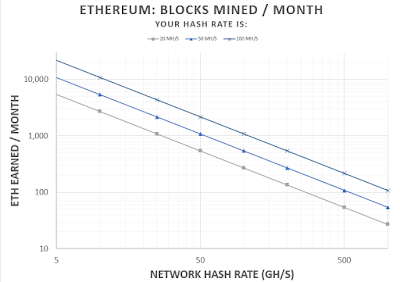 So what we are seeing here is there is a relationship between the network hash rate, your hash rate, and how many blocks you'll be able mine every month.

Now lets look at how much $ you'll be able to make at this game: 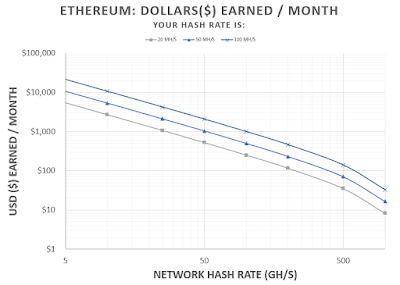 So here we're assuming that Ether is valued at $1/Ether, and that each time you mine a block you get 5 Ether. Additionally, we assume that it costs $15/20MH/s per month to run your GPU. A month is assumed to be 30 days. Thus a R9 280x that produces around 20MH/s for the whole month will cost around $15 to run (values are reasonable for the United States). Based on these assessments, we can see that there is a huge incentive for GPU miners to pile on the Ethereum train as a single R9 280x card (which produces 20MH/s) could potentially earn you $40/month in profits (or much more, or much less, depending on how fast people pile their GPUs onto the Ether train).

Now using this graph, we can get an idea of what value of Ether is required to support a given hash rate. Personally, if My R9 280x card, which is burning $15/month in e-, if it's making me $20/month in profits, I'm ok with that. This means it'll also pay for itself in less than a year. Thus, a 1TH/sec, I'll still be mining if Ether is work $1. And, if Ether is worth three times as much, I'll be able to mine until the network hash rate reaches 3GH/s.

I would roughly expect the hash rate to reflect 1 TH/s per $1 of Ether. So since Ethercoin is currently trading around $3, I would expect that at the Frontier launch we might get as high as 3TH/s mining on the Ethereum network. Network hash rates that exceed the 1 TH/s value of Ether indicate that the community believes Ether will be worth more in the future than it is now, and wold be a bullish indicator.

might need to remake the graph now that we're getting a ridiculous 80-100gh/s for the network :)

20mh/s won't do anything now :( i'd be surprised if someone running a single instance with 20mh/s actually ended up with ~50 blocks even after a month.

Agreed. I'll remake these numbers to something more reasonable for the average miner. Additionally, I think our average block time went up, so, that changes things too.

I heard somewhere that you can get the same results from a 2 gb card as from an 8 gb one, 'cause it's actually not using that extra. And that the solution would be to have multiple parallel 2 gb ones. Do you quys know anything about that?
Also, I was thinking of trying solo-mining on ubuntu 16.04. Has anyone tried it? Or is 14.04 the safe way to go?
Ioana

This is Very very nice article. Everyone should read. Thanks for sharing. Don't miss WORLD'S BEST TrainDrivingSimulatorFreeGames